While visiting Madrid’s wonderful Christmas Markets my daughter and I decided to spend a couple of days exploring Segovia.   The high-speed AVE train takes about 35 minutes and costs around 10 euros.  We got on the train at the downtown Madrid’s Chamartin train station which is an extremely busy city rail station and exited the train in Segovia’s AVE station which seemed to be in the middle of nowhere, all you see is farmlands surrounded by snow-capped mountains.  The station is about 4km outside the city and there are plenty of taxis waiting outside to take passengers into Segovia.

Segovia is a walled medieval town guarded by ramparts that were built-in the 11th century.  Its rich and complex history ensure it is a very popular destination for engineers,  historians, religious folks and tourist in central Spain.

We had reservations at the Hotel Candido in Segovia because it had both an indoor pool and a Turkish Haman.    The lobby and common areas were festively but tastefully decorated for Christmas and our room was luxurious and richly draped with exquisite textiles and Spanish furnishings. The bathroom was enormous with a steam shower, separate whirlpool tub and the largest collection of high-end amenities that I’ve ever seen.    Walking the halls of the hotel we were impressed with the exquisite carpeting, wall hangings, and stain glass ceilings.  The Candido has an expensive, old world charm with photos of the King and Queen of Spain and other luminaries who have stayed there proudly displayed on its walls.

The Candido’s spa is exceptional.  We loved every minute we spent in the Turkish bath or Hamann,  the fiery Finish sauna,  hazy steam room and tranquil indoor pool with a delightful waterfall faucet and separate whirlpool.  Since Segovia is in Europe swim caps are pretty much mandatory, so pack your own or purchase in the Spa.   The hotel is about a mile away from the main tourist area inside the Old City but we did not mind as it is easily walkable downhill to the Plaza Major and uphill on the return.

Most of the top sites of Segovia are within the Old City section of town.  To get to the Old City you must enter through the impressive Roman Aqueduct bridge.  About 2000 years ago Roman Emperors had the Aquaducts built to bring water from the Frio River to the Segovia citizens and is still in use today.   In 1985 the structures were named a UNESCO World Heritage Site.    This water conveyance method is widely considered to be an example of perfect engineering because the massive Aqueduct was built using the opus quandratum method, which included using over 20, 000 large stone blocks perfectly balanced on themselves but not affixed with cement or mortar.  We kept wondering how the arches and bridge did not collapse with no cement to hold the granite together. We climbed to the top of the bridge and had an inspiring view of the mountains and countryside.

After obligatory photos in front of the Aquaducts, you then to climb a hill to enter the Old City where most of the major historical sites are located.  The streets are lined with cafes, confectionery stores and small stalls selling medieval era toys, such as swords and archery bows, local cuisine and religious items.  Another must-have while in Segovia is a churro or two.   A churro is defined as a strip of fried dough dusted with cinnamon or sugar but in Spain, they have mastered the culinary delight by adding a cup of hot chocolate pudding to dip the dough in.  Deliciouso.

At the top of the hill, you enter the beautiful Plaza Mayor and you will immediately see The Cathedral. The Cathedral is a 15th-century masterpiece that houses over 15 chapels. The cloisters alone are worth the visit but every inch of the holy place, including the altar, and choir stall contains significant works of art.

We really enjoyed our visit to the Alcazar which reminded us of a fairy-tale castle and it’s only a few blocks from Plaza Major.  The Alcazar dates back to the 12 century and was the home of King Alfonso VIII in the 13th century.  It has everything a medieval history buff could ask for. Its Gothic style has a tower ringed with 10 circular turrets and a drawbridge. Visitors can walk around and enjoy its exquisitely furnished tapestries, armors and arms and then climb the tower and enjoy panoramic views of the countryside.  The Alcazar was originally used by the military and was built on a steep rocky crag hill.   During the 800-year Reconquista period, Alcazar occupants had an excellent vantage point and this castle proved to be impenetrable to approaching Moor invaders.

The Spaniards love to eat ham and this place is no exception. Everywhere you go you will see signs and displays for Cochinillo Asadoor or Suckling Pig.  It was explained to us that the roasted meat is so tender because the baby piglet is less than 3 weeks old, have never eaten any food just its mother’s milk and must not weigh more than 5 kilograms.  The dish is so popular that every tourist shop even sells suckling pig refrigerator magnets.

When in Spain we always have a hard time with the time schedule for eating.  They enjoy long, leisurely lunches, afternoon siestas and then around 9pm or later supper is offered in the restaurants. Sometimes this doesn’t work when traveling with children but ‘when in Spain.

We thoroughly enjoyed our visit to Segovia, learned a lot about the Reconquista and the defeat of the Moors, Roman engineering genius, and how delicious churros are. 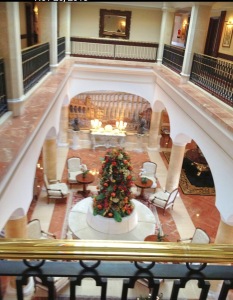 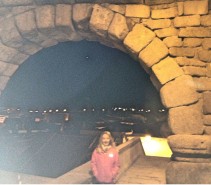 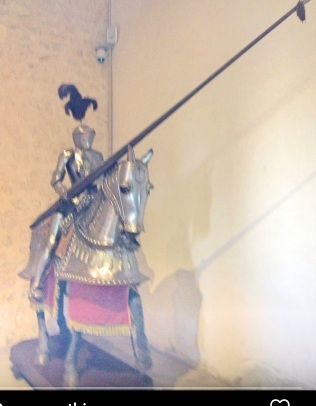